The Soldier, The Sand Storm, and The Mine Field

HomeThe Soldier, The Sand Storm, and The Mine Field 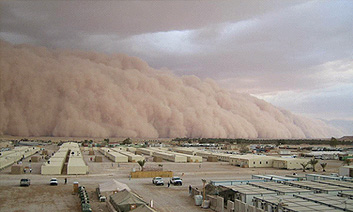 2005 – The Churning as captured from the U.S. Army Head Quarters in Fallujah, Iraq

Tim’s head was pressed hard against a burning hot rock wall. It was so hot the skin on his cheek was sizzling. Gasping for breath behind the shemagh which barely kept out the blasting sand, Tim cried to God: “Please, God… Please stop this storm”.

Tim’s company of Marines had been called to gather reconnaissance at a remote location near Fallujah, Iraq when they discovered an outpost that housed enemy ammunition stores. As ordered, they blew up the ammo cash and the outpost which housed it. However, they then found themselves without shelter when the worst storm in a century struck. It is now known by the natives as “The Churning” and “The Airing of Grievances”.

Sgt Tim standing in front of the Ammo Dump.

Tim could not understand why God did not hear his pleas. He prayed and prayed, but the storm persisted. For three days the Marines were pinned down, barely surviving as the storm raged. Finally, on the morning of the third day, The Churning ceased. Tim and his company of soldiers were badly battered, but alive. They could not understand why God let them suffer in such a grueling manner. That is until Tim stood atop a remaining wall and discovered a mine field which had been uncovered. The storm had moved so much sand that the mines, IED’s, and explosive traps which the enemy had planted were now in plain sight. Tim gasped, and began shouting to his company the location of the death traps.

Despite our inability to comprehend God’s actions, He always has our good in mind. The Marines thought God turned a deaf ear to their suffering, when in fact He was saving their lives.

Jeremiah 29:11 says: “For I know the plans I have for you, declares the LORD, plans to prosper you and not to harm you, plans to give you hope and a future.”

“In his heart a man plans his course, but the LORD determines his steps.” Proverbs 16:9

When you Believe God, more than just believe in Him… But actually BELIEVE He is the Almighty God who breathes out stars, holds the Universe in His hand, and controls the very movement of each and every atom of your body… Then you will also believe that when you are pinned down by the Churnings of life, despite the moment’s sizzling pain and blistering sand, God is actually in the process of delivering you from unseen destruction.

“Now unto him that is able to do exceeding abundantly above all that we ask or think, according to the power that works in us” Ephesians 3:20

“The eyes of the LORD move to and fro throughout the earth that He may strongly support those whose heart is completely His” 2 Chronicles 16:9 NASB