DAVID AND GOLIATH – defeat the giants in your life

HomeDAVID AND GOLIATH – defeat the giants in your life 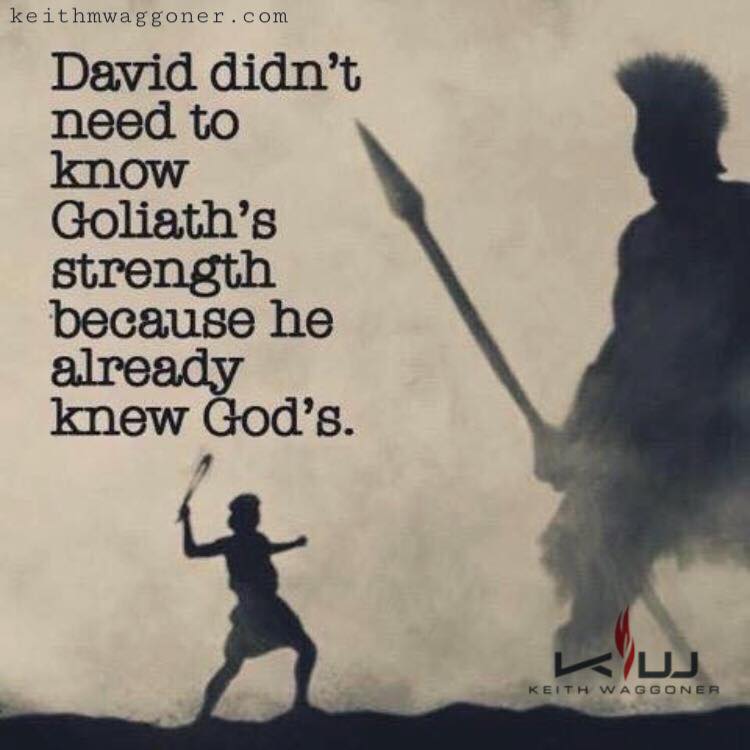 Everyone knows the Biblical story of David and Goliath – little guy beats the big bad bully. The funny thing is we usually get this story backwards. It was David that had all the advantages in this battle, not Goliath.

The real lesson of David versus Goliath is how a perceived advantage can actually turn out to be a disadvantage in practice. This kind of situation crops up in life and in business much more often than you might realize.

When ordinary people confront powerful opponents, the first question that usually gets asked is: “Who has the most power here – and therefore the greatest chance of success?” The real question you should be asking is: “Do I want to play by their rules or by mine?” If you can find a way to play by your own rules, then you increase the odds that you will prevail quite significantly.

Underdogs can and do win more often than you think. The key to pulling this off is not to go against a competitor where they are obviously strong and formidable. Instead, figure out a way to go around, under or over them rather than against them. That’s how to win.

“Much of what we consider valuable in our world rises out of these lopsided conflicts, because the art of facing overwhelming odds produces greatness and beauty. We consistently get these kinds of conflicts wrong.” – Malcolm Gladwell

David versus Goliath Who had the advantage?

Most people who read the ancient Biblical story of David and Goliath marvel at the fact David (the underdog) was able to defeat Goliath (the overwhelming favorite.) But was that in fact how the battle really played out?

Goliath was a Philistine. The Philistines were from Crete and were therefore a seafaring people who settled along the coast of Palestine. In the second half of the eleventh century, the Philistines started moving east which brought them into conflict against the Israelites who lived in the mountains under the leadership of King Saul. The Philistine army worked along the Elah Valley with the goal of trying to capture the mountain ridge near Bethlehem, if they could do that, they would split Saul’s kingdom in two. Saul gathered his men and hastened down from the mountains to try and prevent the Philistines from doing that.

Both armies pitched their tents either side of the Elah Valley and sat there looking at each other. To resolve the deadlock, the Philistines sent Goliath to engage in an accepted practice of the time called “single combat.” The idea was to save bloodshed, each side would pick a champion to represent them. Goliath was at least six foot nine and he carried a javelin, a spear and a sword and was perfectly equipped for close hand-to-hand combat. He cried out: “Choose you a man and let him come down to me. If he prevail in battle against me and strike me down, we shall be slaves to you. But if I prevail and strike him down, you will be slaves and serve us.”

At first no one from the Israeli army responded but then, David, a shepherd boy who wasn’t even a soldier informed King Saul he would battle Goliath. At first Saul dismissed the notion but he then realized he had no other options. Assuming David would fight Goliath hand-to-hand in the conventional way, Saul tried to equip David with armor but it was so bulky David couldn’t move in it. Eventually, David ran down the hill to battle Goliath in one of history’s most famous battles equipped with little more than his shepherd’s sling and five smooth stones.

At first glance, it appears David was at a severe disadvantage but the facts portray a different story.

Some of these key facts were:

When Goliath issued his subtle challenge (“Come to me, that I may give your flesh to the birds of heaven and the beasts of the field,”) he assumed his opponent would engage in hand-to-hand fighting honoring the rituals of single combat. When David runs towards him (demonstrating superior maneuverability) and slings his projectile from more than a hundred yards away, everyone watching knew Goliath would be defeated even before the stone had struck his forehead.

The battle Goliath was expecting did not materialize as planned. Instead, this slinger started attacking him from a safe distance. Goliath, weighed down by armor, could only stand and watch with horror. David added to his discomfort by taunting Goliath :”You come against me with sword and spear and javelin but I come against you in the name of the Lord Almighty, the God of the armies of Israel, who ye have defied. This day the Lord will deliver you into my hands, and I’ll strike you down and cut off your head. All those gathered here will know it is not by the sword or spear the Lord saves, for the battle is the Lord’s; and he will give all of you into our hands.”

“Goliath had as much chance against David as any bronze warrior with a sword would have had against an opponent armed with a .45 automatic pistol.” – Robert Dohrenwend, historian

“We find that David could have slung and hit Goliath in little more than a second – a time so brief that Goliath would not have been able to protect himself and during which he would be stationary for all practical purposes.”

In the event, David did strike Goliath from a safe distance away and then decapitated him as promised. True to their undertaking, the Philistines then withdrew from battle leaving the Israeli’s victorious. David would later build a glittering career as a replacement king for Saul on the strength of his reputation gained by defeating Goliath. However, the fact remains most people assume it was David who was in an inferior position in the battle with Goliath. The opposite was in fact true. David was operating from a position of power and advantage. He substituted agility and maneuverability for sheer brute force.

“Why has there been so much misunderstandingaround that day in the Valley of Elah? On one level, the duel reveals the folly of our assumptions about power. The reason King Saul is skeptical of David’s chances is that David is small and Goliath is large. Saul thinks of power in terms of physical might. He doesn’t appreciate that power can come in other forms as well—in breaking rules, in substituting speed and surprise for strength. Saul is not alone in making this mistake. I argue that we continue to make that error today, in ways that have consequences for everything from how we educate our children to how we fight crime and disorder. But there’s a second, deeper issue here. Saul and the Israelites think they know who Goliath is. They size him up and jump to conclusions about what they think he is capable of. But they do not really see him. What the Israelites saw, from high on the ridge, was an intimidating giant. In reality, the very thing that gave the giant his size was also the source of his greatest weakness. There is an important lesson in that for battles with all kinds of giants. The powerful and the strong are not always what they seem. David came running toward Goliath, powered by courage and faith. Goliath was blind to his approach—and then he was down, too big and slow and blurry-eyed to comprehend the way the tables had been turned. All these years, we’ve been telling these kinds of stories wrong.” – Malcolm Gladwell